What a blur! We're already midway through December (more or less) with Christmas and New Year's breathing down the necks of panicking consumers looking to score that one gift or stunning outfit for the festivities. While others are gearing up for the holidays, we in AmeriCorps keep ourselves busy with service project after service project. Here's the recap of the past two weekends:

I once again had the awesome opportunity to participate in Camp Treasure, a two-day overnight camp hosted by the American Association of Caregiving Youth (AACY). Last year's experience definitely helped get me ready for what to expect this year. Despite some staffing changes, camp went over really well. It is always exciting to see these kids have the chance to be kids and not have to worry about taking care of a loved one for a weekend. They do so much for their families; two days off is the least that can be given to them! 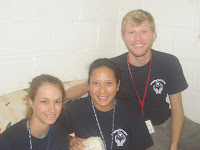 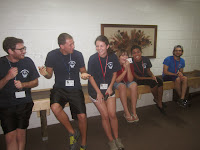 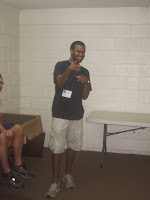 While this actually doesn't count as a service project, EdVenture had their annual holiday party at a local sports bar, Bru's Room. Kevin, Leah, and I made an appearance at the bash. It was nice to be able to socialize with everyone that we serve with in a more informal setting. The night was filled with free food (the best kind), karaoke, and enough college football to keep any sports fan happy.

Being functional before the sunrises is never a thrilling task. It's especially a daunting one coming off of a long couple of days chasing children around a campsite, making sure they stayed safe and didn't hurt each other. But, lo and behold, as 4:45 am rolled around, I found myself standing in line to check in and receive my assignment for the 10th Annual Palm Beach Marathon. I was placed at water station D with DeShaun, which was an awesome pairing! After being dropped off at our station, we helped set up and fill cups with water and Gatorade. The theme of our placement was the North Pole. We were given elf gear by the people in charge of the station and prepared for the runners and cyclists to come our way. We were one of the earlier water stations, so the runners were still pretty clumped together when they came our way. At one point, there were mobs of runners on both sides of our table. It was a bit chaotic to say the least, but by 8:30 am, all of the runners had passed and we were headed back to the finish line! We ended up helping hand out water to the finishers as well. All in all, despite the early start, it was a great project and helped re-light my personal fire to complete a half marathon before I leave Florida! 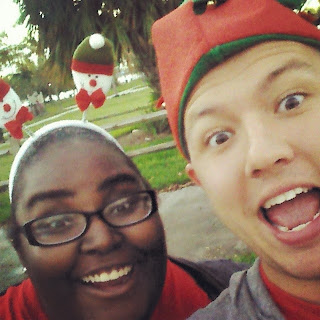 So following a long day of handing out water, we were rewarded with a nice holiday dinner down in Boca Raton at a upscale Italian restaurant called Maggiano's. We had our holiday dinner here last year as well and it didn't disappoint. Between the great food, grab bag gifts, and Target gift cards, the night was a great way to cap off a long day of service. 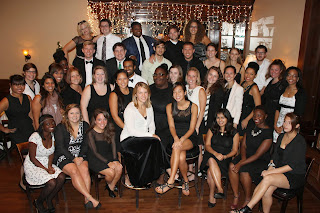 This weekend was filled with holiday themed service projects. The first one that we participated in was at the Mandel Public Library, a site that two members serve at, working with adults, teens, and youth in various areas, including computer literacy and homework help. The pavilion outside of the library was transformed into a winter wonderland, complete with Santa, his reindeer, elves, and a multitude of crafts and activities to keep the more than 1500 participants busy for multiple hours! Hallie, Jordan, Cassie, and I took on the role of Santa's little helpers and assisted children in the making of a small wooden train (and by assisting, I mean helping them color a train engine with paint pens). Our station was swamped with children and parents vying for one of the those coveted little trains from the start of the event. The constant waves kept us busy and helped the time fly by! 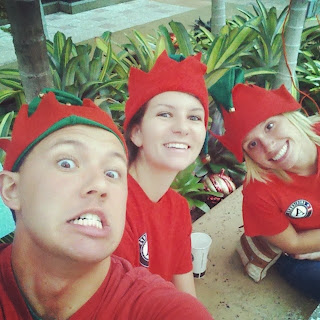 Today marked the end of the tirade of projects over the last few weeks. Adopt-A-Family hosted their annual Santa's Workshop event, in which families that are associated with this non-profit have the opportunity to come and get some gifts for the holiday season. Not only did we help kids pick out gifts for their families, we also assisted in the wrapping of these gifts, and helped man various activity stations. Kids went home with not only some things to put under their trees at home, but also a brand new picture frame, reindeer antlers, candy cane ornament, and enough holiday cheer to get them through the next couple of weeks!

Even though the multitude of service projects is starting to wind down, life in general is still going at full speed. This upcoming week if the last one before the holiday break starts. Some members from last year (Sara, Kevin, and Erin) are making their ways down here to South Florida to visit. It'll be nice to see some familiar faces from last year before we all head our separate ways to celebrate the holidays. For me, that means heading back to the blustery, chilly conditions of Iowa to see friends and family for a week before heading to Savannah to ring in the new year! 6 more days till a much deserved break! Can't wait!!


Posted by Michael Owen at 8:12 PM No comments:

A month long hiatus is inexcusable, I know and apologies are in order. However, the past month of November has been a hectic one filled with tons of gatherings, events, and projects. Here's the much awaited for recap: 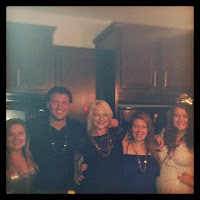 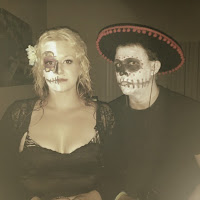 - The month of November was littered with numerous birthdays, especially during the first week! These hectic seven days witnessed 5 members gain another year of life - yours truly included! Year number 27 was ushered in with a Day of the Dead (or Dia de los Muertos for my Spanish speaking peeps) party. I had the pleasure of sharing this joyous day with Melissa. It was followed up by birthday's for Andrea, Sam, and Cait - all before the 7th of the month! Quite the way to jump start the month! 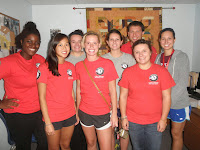 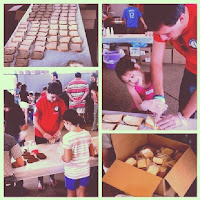 - Service Projects also littered the month. We assisted with the inventory at a non-profit that recycles and distributes medical equipment to needy patients called Clinics Can Help. A Jewish temple in Boca Raton had us helping out with a Mitzvah day in which members of the their congregation did good deeds to help those less fortunate in the community. The holidays brought ample opportunities to not only give back, but also enjoy delicious food. The Florence DeGeorge Boys and Girls Club and Vita Nova, a non-profit the helps foster youth who are about ready to age out of the foster care system stay on a productive path, enabled us the opportunity to chow down on some great food and carry on some lovely conversations. 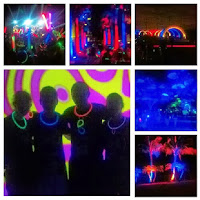 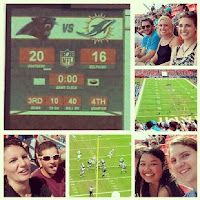 - The month wouldn't be complete with some fun social activities either! Country night was enjoyed at Cowboys. Line dances, mechanical bulls, and cowboy hats littered the bar as old memories were revisited! Nick, Hallie, Zoe (Hallie's sister) and I all participated in the Electric Run, which was such an awesome experience! It was like the Color Run, only at night and minus the powder element. We raved, danced, and partied all night long like we just didn't care! Jordan, Leah, Cassie, Phetsada, Hallie, Zoe, Nick, and I also were able to attend a Miami Dolphins game. Even though they lost to the Carolina Panthers, the game was entertaining!

The month of December promises to be just as hectic and exciting! Numerous service projects dot the schedule. Visits from old friends from last year highlight the last week before break. A much desired and exciting trip home to Iowa helps wrap up the month! Stay tuned for more updates (and hopefully they'll be more frequent than last month!)

Posted by Michael Owen at 11:04 PM No comments: