The Christmas season is fully upon us.
Here in Seoul that statement rings true just as loudly as anywhere else in the world.
Subway stops are decked out in lights and garland.
Massive trees don plazas and storefront windows.
Mariah Carey and Justin Bieber can be heard belting out from local stores.
And what Christmas season is complete without an ugly sweater party!

This past Friday night, my friends Emma, Rich, and Rob rented out a bar in northern Seoul for the festivities. About 30 people showed up, most of them sporting hideously ugly sweaters. Another fun and entertaining part of the night was the White Elephant Gift Exchange. A popular event in the United States that was properly introduced to the British, Canadian, and Irish folk in attendance. That was a huge success. Everyone that participated ended up with very entertaining and somewhat practical gifts. I took home a huge bag of restaurant starters (they remind me of very very very airy and edible Styrofoam packing peanuts) and a spoon/chopstick set. Other memorable gifts included a Hello Kitty toilet seat, wind-up, light-up Lego man, various Korean alcoholic drinks, and a Rudolph replica constructed out of 5 bottles of Cass beer (complete with antlers and a red nose!). 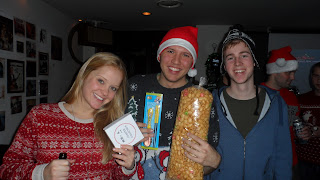 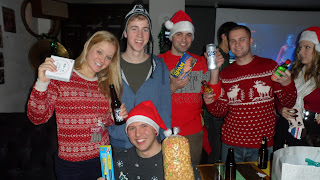 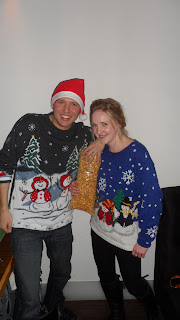 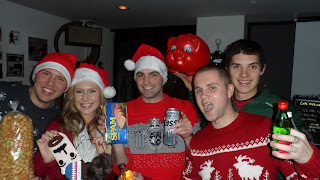 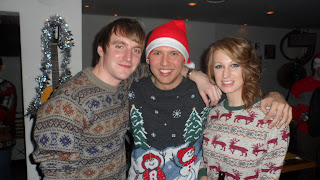 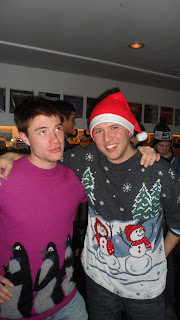 Since I've gotten to Seoul, I've been wanting to do some sort of volunteer work to get me out into the community and meet others here in the area that have the same interest. One such opportunity presented itself on Saturday. Emma (the other person in the snowman jumper (aka sweater) above) and I met up with our friends Sam and Rachel at the House of Hope. This is a home that has activities and social opportunities for mental challenged children and adults. We spent the afternoon helping them set up for their end of the year volunteer awards banquet. In the process, I was able to meet various people from all walks of life and look forward to getting even more involved with this group.

Following my day of volunteering, I headed out to Bucheon, which is a "suburb" of Seoul and hung out with my friend Tennille and some of her co-workers form the Hagwon that she works with. It was great meeting some more new faces and being able to hang out with her and do some catch up. All in all it was a fantastic weekend spent with great friends, new faces, and some Christmas cheer! 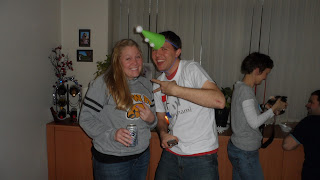 Posted by Michael Owen at 5:29 AM No comments:

I'm not a big fan of people who use blogs as a ranting post to air their dislikes and annoyances. However, today I am going to take on that role (kind of).

I have been here in Seoul for almost 4 months now and have been enjoying my experience. This is an amazing, happening, bustling city with lots of opportunities and things to do. My job at school is going so well (just finished finals week) and I've made tons of friendships that will last well beyond this experience. If there is one thing that I still dread everyday (and no it's not getting up while the sun is still not shining) it's braving the subway. Don't get me wrong, the public transportation has its perks (I'll get to those later), but also it's downfalls.

Here's my pros and cons list regarding the Seoul subway (cons first so I can end this post on a positive, upbeat note!)

Con #1: The Morning Commute
Refer to the subway map below (yes, the Seoul metro system is gigantic!)

I live on the Green Line (Line #2). It is the only line that is a loop and intersects with every other subway line in Seoul. This makes it one of the most popular and most used subway lines in the city. As you can see from the map, I live 3 stops away from school. I live at Seoul National University and work near Bangbae Station. Easy, 10 minute ride, right? Not so much.

The morning tends to be a nightmare more often than not. This is what the ideal subway train ride looks like: 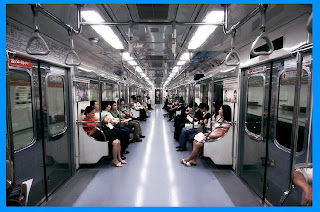 Plenty of room, some seats are available, personal bubble still in tact. This is what my morning commute is like (I took this picture as I entered the subway earlier this week): 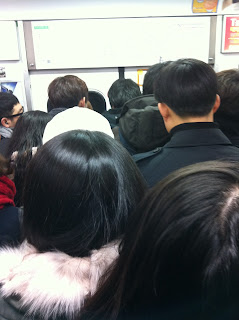 Jam packed with people. No personal space. People pushing and shoving just to get on the train when the next one is literally 30 seconds behind. I've been elbowed, shoved, felt up, and more more often on these trains in the morning than I ever have my entire life. One morning, I was elbowed in the groin not once, but twice by a seemingly sweet, little Korean women while simultaneously being felt up from behind by another gentlemen. It was quite the experience.

But nothing really tops this one. One morning I got on the subway, with my brave "You can do this" face on. As the weather turns colder here in Seoul, people are starting to come down with colds and the face masks are becoming more and more popular. As I entered the subway, I was stuck in the unfortunate position of facing the person standing in front of me. This tends to be a very awkward ride, especially if you are about the same height (which we were). I tried my best to avoid eye contact and focused on my Words with Friends game I was engrossed with on my phone. That's when I heard it.

You know that inhaling sound people make right before they sneeze? Yeah, that sound. Having no way to actually avoid the blast zone, I managed to turn my face just in time to avoid swallowing the incoming spittle and God knows what else. Since I couldn't block the attack, there was also no way that I could remove the remains from my face, as my right arm was pinned to my side by the three people smashed into me. I was also unable to use my left hand due to the awkward angle that my left hand was now in as I moved to avoid the blast. Needless to say, I had to spend the next 10 minutes with someone else's germs and possible diseases on my face before I finally wriggled my way free of the subway. Definitely the worst experience so far.

Con #2: Salesmen
Now I understand that people need to make a living, but shuffling onto an already crowded subway to sell people slip on shoes is a bit annoying. Between their microphones and in ability to make a sale, I half feel bad, half can't wait for them to move to the next car.

Con #3: Evangelist
Along the same lines as the salesmen, I don't really want to spend my subway ride listening to someone preach the Gospel. I'm a believer, I'm good to go.

Con #4: Nightly Commute
If it sounds like the morning commute is horrendous, then the nightly commute is just as brutal as well. The peak hours in the morning last from 7:30 until 9:00. Nightly peak hours encompass 6:00 until 7:30 pm. This is also prime time for going out to eat and meeting friends. This means that I become subjected to more crowded, pushy Koreans. Things kind of settle down around the 8:00 hour, but then pick right back up from 9:00 until the subways close around 11:30...which leads me to my last con...

Con #5: Lack of 24 hour service
Apparently the subways, taxis, and government have a deal that when the subways stop running (even on the weekends), taxis have the right to up their prices and charge even more than normal. The five hours that the subways stop running can make a night out a bit inconvenient. If you want to catch the last train home, you have to cut your night short at around 11:30. Since most nights tend to last until 2 or later, that's always a bummer when that's the option that is taken. The other dilemma becomes how lase does one want to stay out. Making it until 5:30 in the morning is not impossible, but it leads to a wasted day of recovery and drowsiness. If the subways ran 24 hours a day, these delimmas and issues could be avoided.

Now that I have rambled and complained enough for 4 different posts, I am going to give the reason why I really do enjoy the subway and what it has to offer.

Pro #1: Punctuality
During my travels around the world, I have been on many subways. I have used many forms of public transportation. Seoul's subway system is by far one of, if not, the most punctual and on time. Trains run every 2-4 minutes (more often during peak hours, especially on line #2). It's great to know that if you happen to just miss a train, another one is just right behind.

Pro #2: Safety videos
On the more up-to-date trains, there are video boards that tell the upcoming stops, what side of the train the doors will open, and what stops are coming up. While this information is scrolling along the bottom of the screen, there is always an interesting video of some sort playing above it. My absolute favorite ones are the safety videos. Let's just say that if someone with a smoke bomb comes onto the subway and sets it off, I am fully equipped with the necessary knowledge of how to properly find and put on a gas mask and safely escape the situation. It also helps that the acting in the videos is super cheesy and way over the top.

Pro #3: Cleanliness
This subway system here in Seoul is by far the cleanest one I have ever seen. Here is an example of what the subway stations look like: 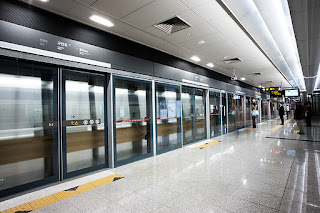 There is very little trash (despite the lack to trash receptacles on the platform). The safety doors prevent anyone from trying to jump in front of a train or do anything else stupid. There is normally ample room to stand and wait for the train, even when it feels like half of Seoul is trying to get on the same train as you are. There have been some subways that I have been in where there has been loads of graffiti and heaps of garbage everywhere. It's a welcome site to not have to sidestep piles of waste while trying to navigate the busy subway platforms.

Pro #4: Ease of use
Despite it's ominous size and downright enormity, the subway here is very easy to use and navigate. All of the stops are announced over the loud speaker in Korean, English, and I believe Japanese (or maybe Chinese). This makes it easy to know your stop even on the trains that are not as high tech and lack video screens/boards. All of the platforms are adequately labeled. Transfer stations have massive signs that lead you directly in the right direction without any major confusion. Multiple other subway systems around the world are just massive, jumbled masses of incoherent signs and jargon. While the subway may not always be the quickest form of transportation here, it is easy to use and master.

Pro #5: Feeling like a big city kid!
Most of my life, I have felt more of a connection to the big city, not the small town setting that I grew up. Being here and living in Seoul has finally given me the chance to experience big city life and all that it has to offer. Part of that offering includes public transport. I'm really enjoying that I don't have to worry about a car, trying to find parking, maintenance fees, or battling traffic. While there may be some downfalls and negative aspects to the mode of transportation that I use daily, at the end of the day, it's the feeling of finally being a big city kid that makes it all worth it!
Posted by Michael Owen at 6:44 AM No comments: