Spending hours upon hours in a car can be super taxing. Legs cramp. Ears bleed from countless replays of the same 7 songs on the radio. Eyes blur at the sight of countless white lines. Finding ways to stay entertained can be a challenge. Luckily, Cathy and I found multiple things to help make the drives a bit more bearable.

1. Pididdle: A game played at night in which players pick out cars that have a head light out. Once a vehicle with an odd number of headlights is sighted, players yell "PIDIDDLE!" and are awarded points depending on the type of vehicle that was spotted. If a car in front has a tail light out, players can yell "ELDDIDIP!" and are awarded double points depending on the vehicle. This game induces lots of yelling matches.

2. Mind Snacks: The iPad is an amazing device that provides plenty of entertainment for hours upon hours. Mind Snacks is an app that helps people learn languages that are not native to themselves. There are tons of games that can be played to help learn vocabulary and basic grammar structure. Spelling games and word matching provides a great way to learn another language.

3. Slug Bug: Volkswagen has been making Beetles for a long, long time. These domed cars rule the road and allow participants the opportunity to slug each other when they see one of these vehicles. Each slug is accompanied by the color of the vehicle. If a false slug is called, a penalty of two return slugs is given back. Bruises and yelps are to be expected.

All three of these games were used to help pass our time on the road for the last bit of our road trip. The last week of our trip took us to Brick, New Jersey, Charlotte, North Carolina, and Atlanta, Georgia.

After we left Cory's house, we headed south to Brick, which is near the shoreline and was an area that was hit pretty hard by Super Storm Sandy back in October. The area is still rebounding from this devastating storm and lots of rebuilding is still going on. We stayed with Cathy's Aunt Lori, but arrived to a locked house and barking dogs. We ended up being locked out for an hour and a half as the spare key that he aunt guided us to was actually for her shed, not the house. After batting away countless bugs and squashing other wildlife, her aunt came home from work. We ended up going down along the coast to a restaurant that was having a re-opening celebration. It was there that I meant Aunt Lulu and played half of a round of mini-golf.

The next day (Sunday), we headed to Lulu's house for a riveting game of cornhole (or bags for those non-Midwesterners) and an amazing lunch of hamburgers, hot dogs, potato salad, chips and pretzels, among other dishes. It was a lot of fun and a relaxing way to spend the day. Monday morning we attempted to go to the beach, but due to traffic constraints, we were unable to make it. So Cathy and I hit the road and made our way to Charlotte, North Carolina! 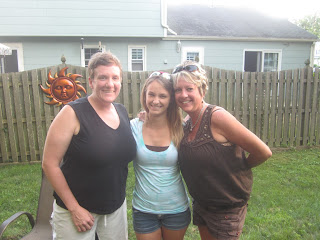 The eleven hour trip to North Carolina was a bit tedious at times, but overall flew by pretty quickly. We hit some stupid construction traffic about 20 minutes from our friend Cori's house. Mind you, this was after having been in the car for like 10 hours! We were going crazy! But we successfully made it to Cori's house, got settled in, watched Tangled, and then passed out.

On Tuesday, we started off our day by meeting our friend JaRon, another AmeriCorps alum who did the program last year, at Bojangles. Ever since Cathy and I met Cori, she has told us that we had to try Bojangles. This desire was fulfilled and it didn't disappoint! We then headed downtown and stopped by a ginormous children's library called the Imaginon and it was a super awesome place! The three story building offered a little bit for everyone and it was fun to just walk around and take it all in. Needless to say, Cathy was going crazy imagining what it would be like to serve/work here! We then walked around downtown, which was a really nice, quaint area.

Following our tour, we headed out to a butterfly garden and bird sanctuary in the middle of a residential neighborhood. It was neat to see some natural nature in the middle of the city and experience a bit of Charlotte history. After our tour was over, we headed back to Cori's house to relax and watch a few movies. That night, JaRon came over and we had a cookout in her backyard. We finally met the famous Haleigh, Cori's 2 year old niece. She was adorable, but refused to look or acknowledge my presence for the entire night. Guess I can't please everyone!

It was great to see Cori and JaRon again and catch up to see what they are up to. Cori is heading out to Seattle this week to start another AmeriCorps program with her boyfriend Max, while JaRon is going to be attending grad school for special education. I'm looking forward to seeing how the next year treats them! Best of luck guys with everything! 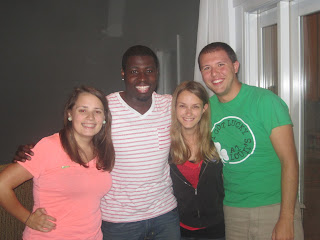 The last stop of our trip brought us to Atlanta, Georgia and our friend Phestada's house. We got in, unpacked the car for the last time, and just sat around and played games on my iPad and caught up. It was great to see her after 3 weeks away. Familiar faces are always a great thing! The next day (Thursday), we headed downtown to meet up with her friend Jennifer, who just recently moved into Atlanta. We went downtown to Centennial Park and watched a fun little fountain show, then headed to the CNN Center and looked around a bit. It was a pretty chill, relaxed day that ended with my first ever trip to IKEA! I want everything in that store! I now understand why it's so addicting for people! The rest of the day was spent prepping ourselves for the long drive back to Boynton the next day with some movies and plenty of laughs! 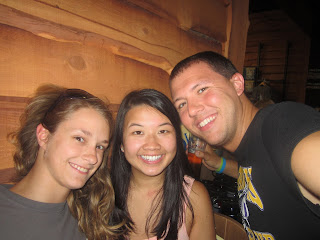 Our three road trip ended with another long drive (about 9 hours) back down to Boynton. We made it back to Las Ventanas, got our keys, and unloaded my car for the LAST time! It was great to be back in Florida and not on the road anymore. Now it's time to get ready for the second round of AmeriCorps! Coming up will be a post detailing how things have been going so far!
Posted by Michael Owen at 7:35 PM No comments:

AmeriTrip: Fires, Hiking, and the City

Driving for long stretches of time can be tiring. The white lines blur together. Brake lights blind you. Car horns pierce your ear drums. Being able to settle down in one place for an extended period of time is always welcomed. Luckily, this past week was spent in the lovely state of Pennsylvania and allowed Cathy and I a chance to rest, re-cooperate, and re-connect with friends and family (well for Cathy at least).

We rolled into PA Thursday night (July 25), saw Cathy's friend Annie, had some scrumptious tacos and ice cream, and then headed over to her sister's, our home base for the week. Throughout the course of the week we saw (and I met) people and saw some pretty cool sites. Highlights of the trip include:

- Meeting some of Cathy's childhood and college friends (all of which were super awesome!) The main reason for us going back to PA was to see Cathy's friend Lizzy, who is currently pregnant. Unfortunately, she did not have the baby while we were in PA, but it was great to meet her and learn more about Cathy's childhood. We also hung out with her friends Annie, Cory, Dave, her sister and her husband Steve, along with a few of their friends. New friendships were formed and I'm excited to see them all again in the near future.

- Experiencing the greatness that is a Pennsylvania diner

- Getting my fill of card and board games for the next couple of months. Scrabble, Phase 10, Bananagrams, Peg Leg, Monopoly Deal, and Skip-Bo were all played multiple times. I felt like I was 10 again and playing games with my family. This was a perfect way to wrap up every night.

- Received a personal tour of De Sales University, the school that Cathy went to for four years. It was definitely a lot smaller than UNI, as their student population is only about 2,000 students - TOTAL! However, for a small school, the campus is very spread out which provided for lots of walking and green grass.

We had a great trip back to Cathy's home state. It was really neat to see where she grew up, went to school, and worked with. We were treated to an amazing week by some pretty cool people! 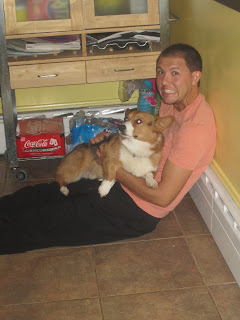 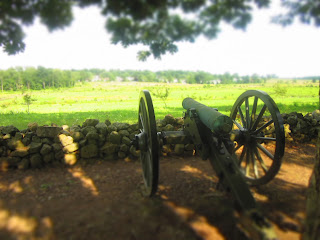 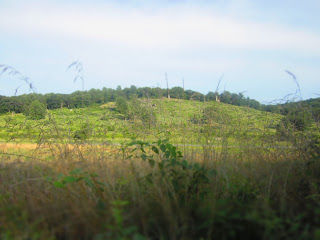 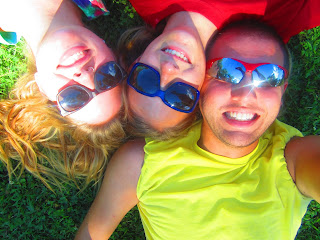 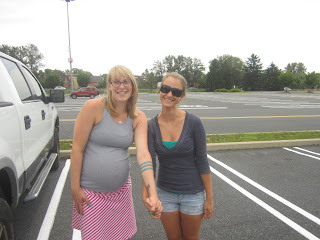 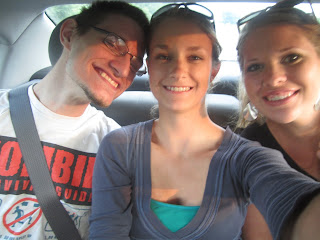 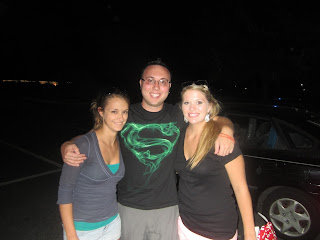 After recharging with our week in PA, we headed across the border into New Jersey to spend a few days with Cory, one of her best friends from college. We enjoyed a couple of late nights by the pool (aka me "accidentally" falling into an above ground pool - that takes talent!), engaged in the awesomeness that is fire (and Cathy didn't burn anyone this time!), and I learned quite a bit about college Cathy. Yesterday, we spent a few hours in The Big Apple. It's been about 3 years since I've been back, so it was cool to walk around and see the sights of the city. Today, we're heading down the road a bit to see Cathy' aunt before heading onto the last two stops of our trip, Charlotte and Atlanta! 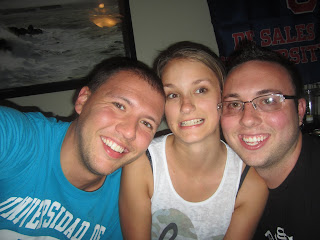 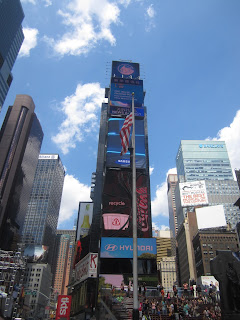 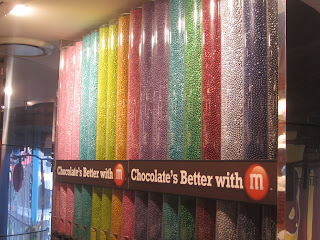 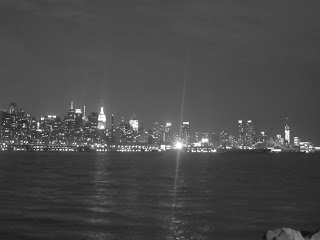 Posted by Michael Owen at 12:06 PM No comments: